I first heard of John Prine when listening to the Nitty Gritty Dirt Band’s second Will the Circle Be Unbroken album.  Blew my mind at the time and I had to go into the sleeve credits to find out who this raspy voiced singer was.  The character in the song is an old-time carpenter and that theme has come to play a huge part in my life in the course of years.  As I started collecting records a decade later Copies of John Prine’s albums started showing up in my record chest.  I am lucky because when I picked them up I did not pay much for them anywhere from a dollar to eight dollars.  As the twenty tens went on, he gained in popularity with a new generation of listeners including me and a group of close friends as well as more and more up and coming musicians in the alt-country and folk scenes.  Those artists will keep John’s spirit going I am sure;  Jason Isbell, Sturgill Simpson, The Felice Brothers, Shovels and Rope, Hiss Golden Messenger, Kacey Musgraves, and many others.  May he rest in peace. 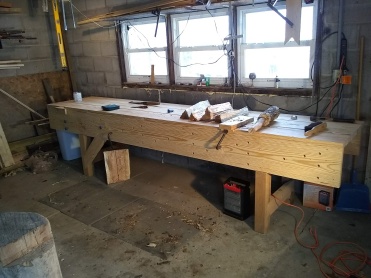 It is almost twelve feet long and is made of old white oak barn beams for the legs and yellow pine for the top and skirt board.  I got the plan for this bench from theenglishwoodworker.com, which is run by the furniture maker Richard Maguire. No vises for now.  I am going to build a few projects on it first and see what kind if any face vise I might want to put on.  A tail vise will not be required, not when the notched batten or doe’s foot works so well and is easily made fro scrap you have sitting around.  I can already say after having planed a few things on the new bench that I can get used to working without a face vise I think.  Using the crochet allows you to pull the work out quickly, check it for straight, and put it back quickly for more planing if needed.  As I move forward in this craft I am in search of a no frills approach to building.   The point of this bench is to allow me to work on large doors, tables, windows and long casework if needed.  It is going to be a pleasure to build things on here for the next however long.  I do not anticipate needing another one but you never know.

I want to learn how to make chairs, specifically welsh stick chairs.  I am working on the seat to my first one right now and am ready to make the legs and back.  I will be posting more about my chair journey soon I think, and I hope to start posting more here after a long hiatus.  Thats all for now.